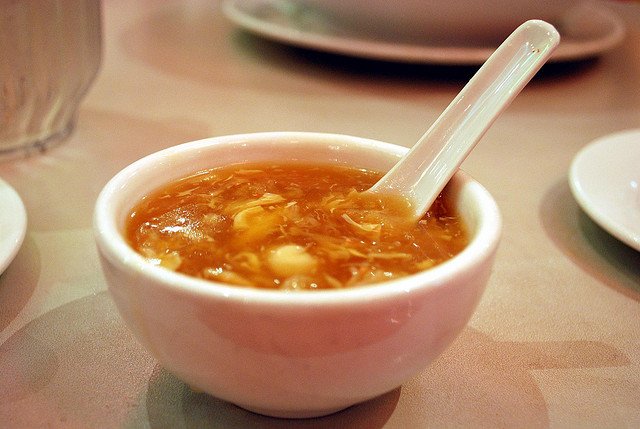 People who are involved in the shark fin trade or who enjoy eating shark fin soup often argue that shark fins should not be banned.

The usual arguments offered in favour of consuming shark fin soup are itemised below, along with the reasons why these arguments do not hold water.

1. Sharks are harmful to humans. We are better off without them.

Although occassionally someone does get injured or killed by a shark, the number who do is actually incredibly small. You are sixteen times more likely to be hit by lightning than to be bitten by a shark.

Although the number of human deaths caused by shark attacks is very small, these incidents are widely reported in the press due to their sensational and unusual nature.

Sharks also have an image problem, partly because of films like Jaws, but also because they don’t have the “cutesy” factor that animals like dolphins and pandas do. Also – contrary to popular belief – only a very few species of shark ever attack humans – the others are totally harmless.

The idea that we might be “better off without sharks” betrays a detachment from nature and lack of understanding of how it works. In the natural world, all elements of an ecosystem are interconnected, and depend on each other in one way or another.

Start taking away the “bricks” that hold up that ecosystem, and sooner or later it is going to collapse. This is particularly true in the case of top predators, such as most species of shark.

Top predators act as the caretakers of their environment, picking off the weak and sick of smaller species, helping to ensure strong and healthy populations and a balanced ecosystem.

2. We live on the land. Who cares what happens in the oceans?

Although we live on land, we are not detached from it. 71% of the Earth’s surface is covered by ocean. Oceans contain 99% of the Earth’s living space and a huge amount of biodiversity. Scientists believe that there are approximately 240,000 marine species.

We also rely on the oceans for much of our food. If we do not practice sustainable fishing methods and manage marine resources responsibly, we will leave an impoverished ocean for future generations.

The fact that sharks have existed for 400 million years is testament to their success as a top predator and an ocean caretaker. If sharks are doing such a great job looking after the oceans maybe we should make sure that they are able to continue doing it!

3. If you ban the trade in shark fins, it will just lead to a black market trade.

While it is possible that some black market trade in shark fins may continue, as it has with ivory, it is extremely unlikely that the scale of trade after a ban would be as high as it is now.

While large numbers of people are willing to risk punishment for the consumption of drugs, it is very doubtful that they would be willing to do this for the “pleasure” of a menu choice.

Despite people’s best efforts, there will always be those who will stop at nothing for material gain, but the response of responsible society should be to take all the measures it can to stamp out activities that are detrimental to other species and the planet.

A black market in slavery still exists in some parts of the world – does that mean it should not have been abolished?

4. Only rich people can afford shark fin soup so it’s not such a big problem.

The increase in wealth of the Chinese middle class means that ever greater numbers of Chinese can afford to eat shark fin soup.

The demand for shark fins has increased massively in line with China’s increased prosperity. Sharks take 7 to 14 years to reach maturity and stocks therefore take a long time to recover from overfishing.

And just a few bowls of shark fin soup accounts for one dead shark, so it doesn’t take much imagination to see the devastating impact that this menu choice is having on shark populations.

5. It’s hypocritical to ban shark fin soup and not other types of meat like chickens and cows.

Vegetarians and vegans would agree that no type of animal should be eaten. However the shark finning issue is different in a number of ways. Firstly, finning means that the main part of the shark is wasted, only the fins are used.

On top of this the act of finning a shark while the creature is still alive is barbaric and cruel and is a practice that would be illegal in most countries’ slaughterhouses were it to be practised on a farm animal (for example if a lamb’s legs were cut off and it were left to bleed to death in a crate).

Another big difference is that sharks are not farmed animals, they are part of the marine ecosystem, and so many of them are being killed that their very existence as a species is being brought into doubt.

According to the International Union for the Conservation of Nature (IUCN), 143 shark species (where there is sufficient data to determine conservation status) are at high risk of extinction either now or in the near future. That’s over 55% of shark species.

6. Shark fin soup is a part of Chinese culture and shouldn’t be interfered with.

It is true that shark fin soup dates back to China’s Ming dynasty. However it was traditionally only consumed by a very exclusive and wealthy minority.

To say that it forms a part of traditional culture for the majority of Chinese is disingenuous, as most Chinese were not in a financial position to ever consume this dish. It is only in the last few decades that consumption has risen rapidly.

For example, according to Wild Aid “The number of consumers who can afford, or have access to shark fin, has risen from a few million in the ’80s to more than 300 million today.”

It is also ironic that those who supposedly have a cultural interest in shark fin soup often display no concern for the conservation status of sharks, which after all would need to be maintained at sustainable levels in order to continue the supply of shark fins for the dish.

What’s more the shark fins used in shark fin soup come from all over the world, which means this is not just a Chinese or Asian issue.

As well as threatening the survival of sharks in all the world’s oceans, the irresponsible consumption of shark fin soup threatens other businesses such as dive centres which require a sustainable approach to marine life.

We would rather that restaurants offered alternatives to shark fin soup on their menus. There are plenty of other things to eat.

A business that is founded on an unsustainably sourced resource is doomed to fail sooner or later.

Businesses which are concerned that a shark fin ban may affect their income should start to look for alternative revenue sources before a ban comes into place.

8. Why don’t you ban fishing for the whole shark?

For many species a ban on continued shark fishing would be beneficial in order to allow species to recover from years of irresponsible overfishing.

However a ban on the trade in shark fins would be effective in reducing supply and demand, as the main reason for recent falls in shark populations is the demand for shark fins.

9. Why are you picking on the Chinese culture when shark cartilage is also used in health food capsules?

What’s more there are alternatives available which do not contain shark cartilage. Many ocean activists are also against the use of shark fins in capsules and so-called health treatments.

Some people have claimed that shark fin soup has health benefits. These claims are unfounded – in fact shark has a very high level of mercury and the United States Environmental protection agency advises women and young children to avoid it.

What’s more, shark fins are often treated with hydrogen peroxide in order to make their color more appealing to consumers. Not really the type of thing you should be eating if you are concerned about your health.