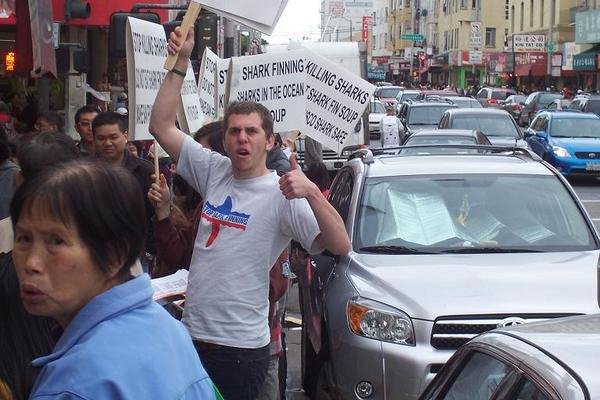 Do you live in an area where there are restaurants that serve shark fin soup? Do you wish they would take it off the menu?

Well people across the world are networking and taking steps to encourage restaurant owners to do just that.

On this page I am posting the contact details of people who are interested in coordinating and contacting with others in their local area who want to see the end of shark fin soup.

So if you would like to get in touch with other people who want to save sharks, send me your email address and location and I will post it here.

What action should you take?

Before organizing any protest, contact the restaurant owners/managers (in person if possible) and tell them about shark finning – ask them if they would be prepared to take shark fin soup off the menu.

Give them a few days to think about it and either visit them again or call back. If they decide to continue selling shark fin soup this is when you can start with the protests. All protests should be peaceful and respectful.

Contacts – email these people if you live in their area and want to get shark fin soup off the menu!

Hessen (also available to network with people in other parts of the country) – ivo@goeckmann.com (Ivo)

Some owners will be more easily persuaded than others. Those that aren’t convinced by the moral and environmental arguments will need to be convinced purely from an economic point of view.

This is not easy – but there are two things that may help them change their minds. The first is protests outside their restaurant, which should consist of talking to potential customers and/or handing out leaflets.

The second is that their restaurant will be listed on a website showing “good” and “bad” restaurants, ie those that serve or don’t serve shark fin soup.

This works best on a local level, so you would need to set up a website to do it (although I can list the good/bad restaurants here if you don’t have the time or resources to set up your own site).

For a very good example of the kind of website I mean check out Shark Free Santa Barbara. It is a big motivator for owners to know that they are going to be getting publicity – but it will either be good or bad publicity, depending on them.

On previous protests, owners have occassionally asked for money from activists to print new menus (with shark fin soup removed). Whether or not you agree to do this is entirely up to you.

Most activists will not be inclined to do this for various reasons. You may point out that the cost of printing new menus will be offset by the extra customers they will (hopefully) get from not serving shark fin soup – this ties in with being listed on a website under the “good” category.

Another suggestion has been that they could put stickers over the shark fin soup item in the menu saying something like “This item removed to help preserve our ocean environment”.

Please let me know if you have any more suggestions, and good luck.