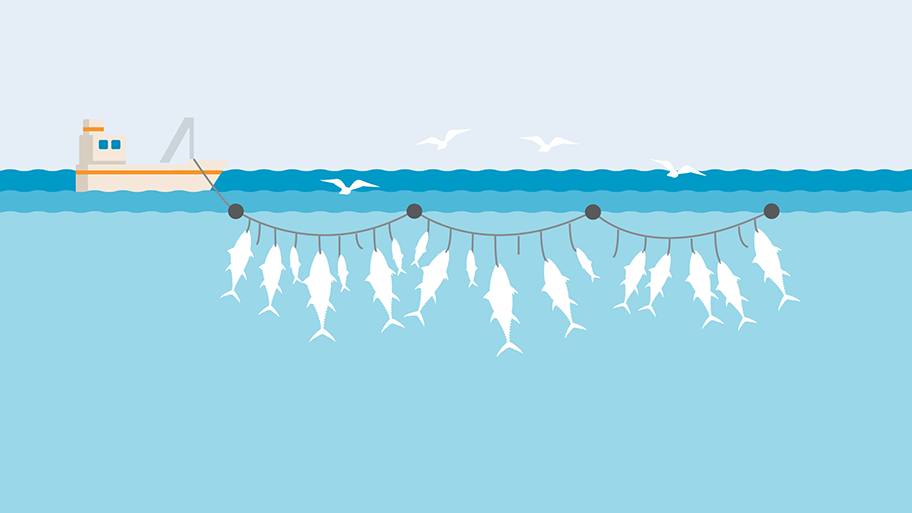 Long lines are made of monofilament and are used mainly to catch tuna, swordfish and shark. Their length ranges from a mile to over 100 miles and is kept near the surface using floats made of styrofoam.

At intervals of a hundred feet or so (30 meters) secondary lines are attached and baited with whatever is at hand – fish, squid or even dolphin meat.

Long lines are a huge threat to the survival of many species of shark. The vast majority of sharks caught by this method are killed only for their fins; the rest of their body is discarded as “bycatch” and thrown back into the sea.

The practice of long lining is inextricably linked to finning. Long lining has been banned in a few specific areas such as the US Pacific coast because of its huge impact on ocean life, however in the vast majority of areas it is still legal and practiced routinely.

Long lines have been accurately described as a “curtain of death” that catches any living creature unfortunate enough to bite a baited hook.

They are indiscriminate – they catch not only the “target” (for example tuna or swordfish), but endangered sharks, leatherback and loggerhead turtles (legally protected), and seabirds, especially albatross.

Over 25% of long-line catch is thrown back into the sea, usually dead.

Long lining must be banned internationally. It is killing protected species of animals and is putting many other species in danger of extinction.

It is the main culprit in the decimation of shark populations by over 90% and must be outlawed immediately if we are not to face the collapse of fish populations and the ocean ecology.