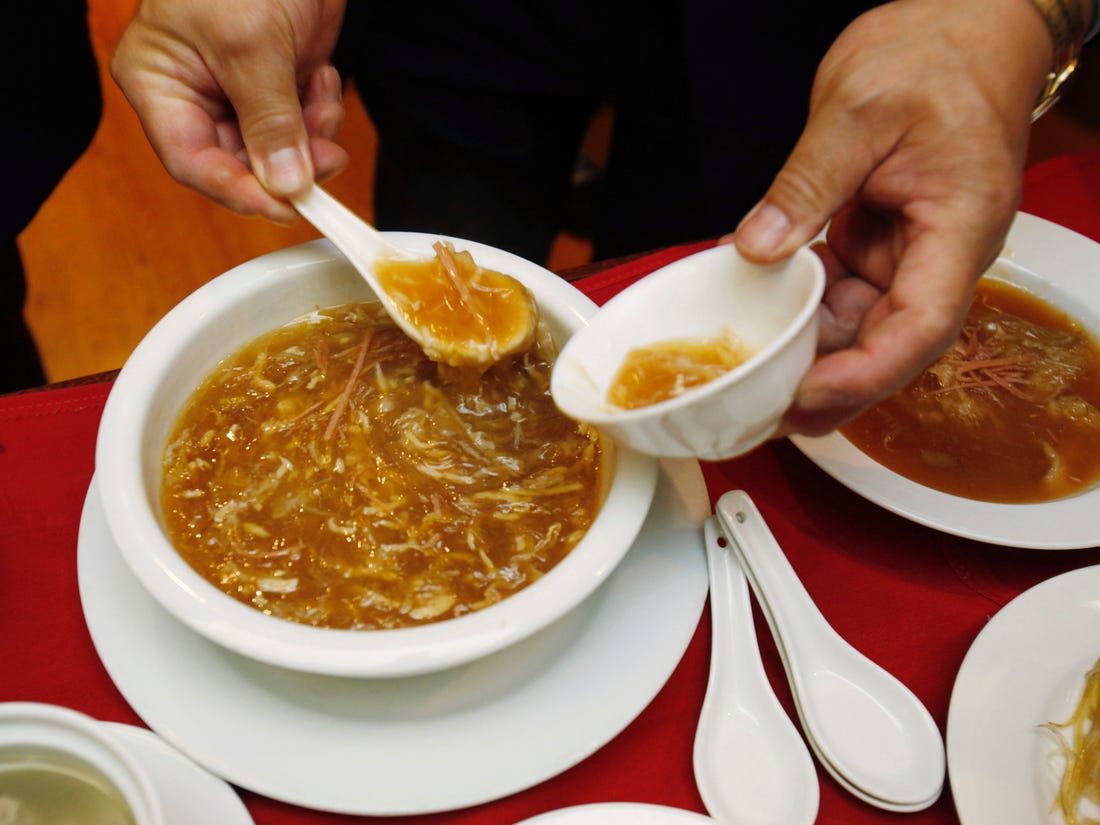 Well, yes, it does. Read on and find out why…

Shark fin soup is a soup or broth of Chinese origin made with shark fin and flavoured with chicken or some other stock.

The fin itself has very little flavour and it is used primarily to add texture to the dish and because it is seen as a delicacy.

It is often served to guests at important events such as weddings and business banquets.

Shark fin soup is not cheap – it can easily cost upwards of $100 per bowl, this fact has helped ensure a steady supply of fins as fishermen and middlemen (sometimes associated with mafia-type gangs) slaughter sharks wherever they can find them in order to satisfy the market.

With the sudden increase in prosperity in the Far East, shark fin soup is being consumed in vast quantities, placing an unsustainable and crippling demand on shark populations.

Shark fin can be bought either frozen or dried, with the dried variety being available either shredded or as whole fins. The fins are often treated with hydrogen peroxide in order to make their color more appealing to consumers.

The soup is often claimed to have health benefits, such as increasing your appetite, improving your kidneys, lungs and bones.

However there is no evidence to support these claims and the reality is that shark meat is barely fit for human consumption.

It has a very high level of mercury and the United States Environmental protection agency advises women and young children to stay clear of it. Click here to see the levels of mercury found in shark compared to other fish.

A survey in 2006 by Wild Aid and the Chinese Wildlife Association showed that 35% of participants had consumed shark fin soup in the previous year. This equates to an immense number of sharks being taken from the ocean.

Sharks take anything from 7 to over 20 years to reach maturity, meaning that it takes populations a long time to recover; the current demand for their fins makes it impossible for populations to return to previous levels.

Sharks are top predators – when they are removed from the ocean the entire eco-system suffers.

Sharks have been around for 400 million years. Are we going to let them die out because of ignorance about the origins of what we eat and because of human arrogance?

Would this still be going on if the soup was made with tiger paws instead of shark fins?

Act now and find out what you can do to help save sharks.